UNDER Three Moons manages to sum up half a lifetime in just three names: Mikey, Mike and Michael. 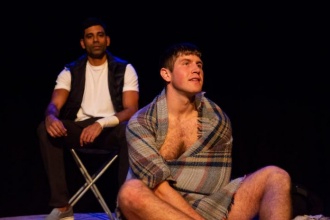 Mikey, introduced as a loud-mouthed and fidgety teenager on a school trip to France, sits in the cold with the jittery Paul, with his attempts to apologise for a night-time prank hampered by stale notions of masculinity.

Then he becomes Mike, hiding out in his uncle’s surf shack with Paul in Pembrokeshire. Their roles reversed, he’s hesitantly asking for relationship advice while the previously sober Paul is sliding into substance abuse.

Finally he’s respectable young father and art teacher Michael whose sleep is disturbed when Paul, a now successful businessman and tai-chi enthusiast, turns up unannounced at Christmas. Picking up their relationship after four years, a headlock is used in lieu of affection.

In each episode, there’s a tension in the friendship. It’s unclear what keeps pulling them together and the threat that their elliptical conversations could turn into violence is never far away.

The space between words intrigues in Daniel Kanaber’s script, although what is actually spoken is often simultaneously humorous and awkward.

“I hope someone dies for you,” says Paul in embarrassed sympathy after learning that Mikey’s mother is waiting for a transplant.

This Box Of Tricks production is equally sparse in its staging — a moon-shaped podium, with lights twinkling on and off like stars between acts.

Kyle Rowe’s Michael and Darren Kuppan’s Paul are on stage throughout, with only the contents of their rucksacks for props and limited sound effects.

With its low-key staging and lightness of touch in its treatment of male friendship, Under Three Moons is a quietly moving success.

Amazon warehouses could be ‘hotspots for infection’ this Black Friday, Amnesty warns

A trampling of Enlightenment values

Fans should be banned until all clubs can bring them back, Bielsa says