WHEN A Streetcar Named Desire premiered in New York in 1947, it was hailed as a sensation. It went on to become a 20th-century tour de force and as director Benedict Andrews demonstrates in this Young Vic production, it is an abiding masterpiece. 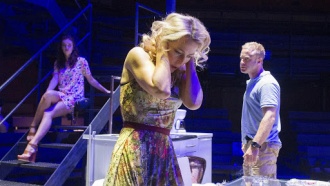 Its subtle updating is an astonishingly daring approach given writer Tennessee Williams’s precision in its original setting.

But it works, for although taking place within a few prescient defined square yards in post-war New Orleans, where the poetry and idiom of the language set it alight, the modern referencing of contemporary clothes, bathroom accoutrements, timeless music and cordless phones only serve to highlight the play’s classic qualities.

An animal physicality is everywhere, from the working loo to the bathtub, to the sweating men and the rampant sexual intimacy.

In a story founded on lies, truth is only evident through the senses. Protagonist Blanche DuBois’s prissy disgust at her sister’s white-trash world is not so much one of offended etiquette, rather it’s the shock of confronting a brutal but familiar reality. It puts snobbery in a whole new light.

Gillian Anderson is a Blanche to die for. From the moment she enters, tottering on stiletto heels, her soft body swaying and yielding to all comers, she’s the epitome of the damaged child and the feminine gone wrong.

Victim and manipulator, fantasist but struggling survivor, we witness her soul and reason gradually and desperately depart. It’s a magnificent and heart-breaking performance.

Ben Foster as the brutish Stanley, Vanessa Kirby as steadfast Stella and Corey Johnson as the seemingly exploitable Mitch are all real and riveting. But it is Anderson who excels.